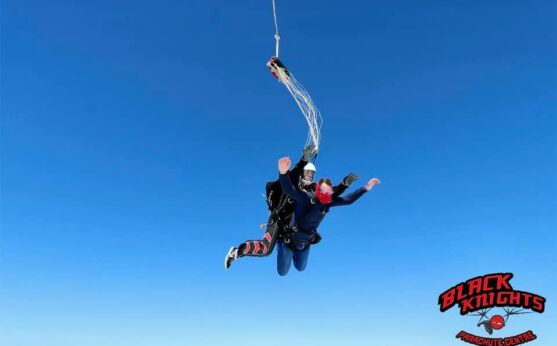 During 2020, when the country went into lockdown, David decided to hold a series of online performances to raise money for Trinity in an effort to stave off boredom.

With an ambitious target of raising £10,000 over two years, David entertained friends, family and colleagues by playing the trumpet, singing and dancing in costume.

After just 15 months (and a terrifying jump from a plane), David was just £1,000 short of his goal. This is his story.

At the start of lockdown, I think everyone was getting a bit bored, so early on I put a post on my Facebook page asking friends for suggestions of local deserving charities which I could support.

At the same time, Trinity put out an emergency appeal for help. My gran had been cared for at the hospice, and I think there are a lot of us living on the Fylde coast who, at some time or another, have had a relative that needs their care.

I knew Trinity was going to need all the support it could get, so I decided to dedicate my efforts to them.

I set out to raise £10,000 over two years. Lots of people said I had overstretched myself, but I just wanted to raise as much as I could. Now I just want to prove people wrong.

It was something to just focus my mind during lockdown, and it was just something I looked forward to. My events took place on a weekend, so I’d be looking forward to them all week, buying costumes and planning, instead of going to the pub or going out for a meal.

A colleague told me at work one morning that she’d signed us up for a skydive. I told her no chance. Absolutely never was I going to jump out of a plane! She told me it wasn’t for ages yet, and that seemed to put me at ease.

But jump day got closer and closer, and last week was just a nightmare. I couldn’t concentrate at work; I was so nervous. But people had sponsored me, and I knew I couldn’t let them down.

On the day of the jump, I was shaking. I was sweating! I’d made a Will the night before!!

The second I tumbled out of that plane, all my nerves went. It was surreal. It was beautiful.

It was the best experience I have ever had in my entire life.

I honestly didn’t realise how hard fundraising was. To start with all I could do was ask the same people – my friends, family and colleagues – to make a donation. But then I started sharing to different groups on social media, and my circle widened.

There are some really generous people about, and I can’t thank them enough for all the support they have given me over the last 15 months. And although £10,000 is a lot of money, it’s a drop in the ocean compared to what it takes to keep Trinity going. I’m just pleased I’ve been able to do my bit.