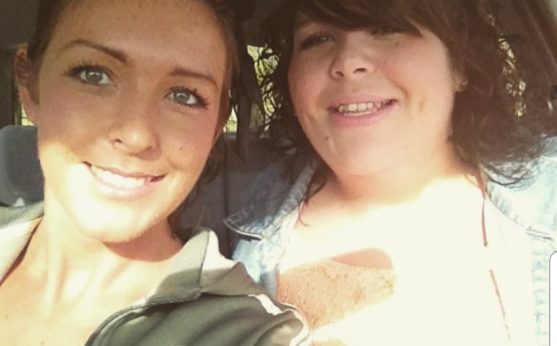 I’m not good with heights. In fact I’m absolutely terrified. So you’ll think I’m strange for signing up to jump out of a plane and fall through the sky. But when I tell you why I did it, you’ll understand it was the best way I could make a positive out of a truly horrendous situation, and how I was able to raise £1,300 for the Linden Centre which will still never be enough to thank them for how they supported me and my family.

My name is Lorna, but this is Nat’s story.

Going back to when we were children, if you’d have asked my little sister, Nat, what she wanted to be when she grew up, she’d have told you she wanted to be a mum. So you can imagine how devastated we all were when, at just 14, she was diagnosed with polycystic ovaries and told her chances of conceiving were extremely slim. But then at 21, she found out she was pregnant! You can imagine how it filled us all with such joy and excitement. We were all thrilled for her – it was our miracle.

Nat had a brilliant pregnancy – she just loved every minute of it and couldn’t wait to hold her little baby. She gave birth to a gorgeous little boy, Harry. He was perfect. But Nat fell ill soon afterwards. She developed a deep vein thrombosis (DVT) in her thigh and parts of the clot came away and travelled up to her lung, causing a pulmonary embolism. She had chest pain, she was struggling to breathe and she was really tired. She was back and forth to the doctors who gave her antibiotics but she just got worse.

Five weeks to the day after she had Harry, Nat suffered a massive heart attack. We called an ambulance which got her to hospital. That’s when her heart stopped. They tried to get her back for 20 minutes but there was just nothing.

At the time, we had our own grief to deal with, but we also had this gorgeous little boy who needed us more than ever. We had absolutely no idea how to cope with his grief.

We got in touch with the Linden Centre to see if there was any way they could help us, and they were absolutely invaluable. They helped us to understand how Harry would perceive his mother’s death, and how that perception would change as he developed and understood more about the world. It helped us to plan for those difficult conversations and to help him understand at the various stages of his life what his mother’s death actually means.

Harry is the absolute double of Nat in his looks and his personality. She lives through him and we all get so much comfort from him. He has got us through some really dark times. He is just thriving. He loves school and has some wonderful friends.

All the way up in the plane, as I was sat on the side ready to fall, and all the way down I was thinking of Harry and Nat, and why I was doing this for the Linden Centre. They all kept me going in those times where I felt I couldn’t do it. I was doing it for them.

We can’t thank the Linden Centre enough for all the help they gave us. To me, raising this money was the absolute least I could do to go some small way to say thank you. I hope it can help to make a difference to other families like ours who find themselves in need of the Linden Centre.