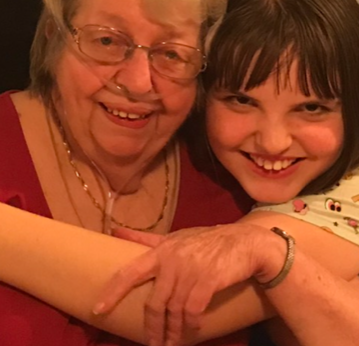 Ellie loved her grandma – she was like a second mum to her right from when Ellie was a baby. They were so close.

For as long as Ellie has known, her grandma was poorly. She had chronic emphysema, chronic kidney disease and type two diabetes. But Ellie was always there, helping her and caring for her. She’s seen her struggle with oxygen therapies and on different machines to help with her condition.

But despite her health, it was a shock to us all when she died. We’d called the ambulance and were told to say goodbye.

It’s one of my biggest regrets not seeing her in the hospital, but she went in on a Tuesday and had died by the following night.

Ellie had been in school when her grandma had gone to hospital. She didn’t get to say goodbye.

But Ellie did amazing. She’d watched her grandma deteriorate and she stood strong at her funeral, reading a poem next to her brother Ainsley. It was hard to believe she was just 14 years old.

Then, some months later, I knew something was wrong.

I’d find her upset and ask if there was anything I could do. I let her know she could speak to me, but she chose not to and I didn’t know what to do.

Then, I happened to be up at the hospital one day and went to see them in the new Swan Suite. I told them about Ellie, and they gave me a memory box for her and let me know about the Linden Centre at the hospice. They referred her for counselling and it was absolutely the best thing for her.

It was hard for her at first – at 14 and going into somewhere new to talk to strangers about how you’re feeling. She was nervous at that first session, but by the next week she came out like a different person.

Each week I’d watch her come out with a spring in her step, and by the end of the six weeks she was much more like her normal self. She said talking to the counsellor felt like talking to a friend. That’s just amazing.