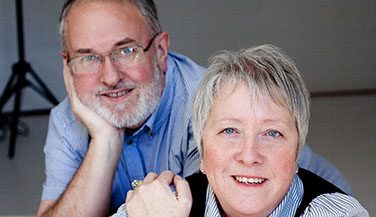 “I have found that since making these special elephants that they have enabled people to talk more openly about death and dying.”

In December 2011 my husband Iain was diagnosed with a very rare form of cancer called Pseudomyxoma Peritonel. This cancer is only treated by two sites in the UK, Basingstoke and The Christie in Manchester. After many trips and two surgeries, we were given the devastating news that there were no more treatments they could offer Iain.

This is when Trinity Hospice came into our lives. Iain spent six weeks being looked after by the wonderful staff in their In-Patient Unit, he was even able to return home and we were lucky to have the care and support of Trinity’s Hospice at Home team. They were only a phone call away and nothing was too much for them.

Sadly Iain passed away at home on Tuesday 2nd December 2014, with his family by his side. In the weeks and months that followed I tried to keep myself busy. I found my inspiration at a sewing group, which I had recently joined, a pattern for an elephant. Using the pattern, I decided to make elephants for my family and friends using Iain’s old shirts. I knew I wanted to do something special with Iain’s shirts, feeling that each one held a special memory of a night out, party with friends or family gathering. By mixing different shirts and patterns I was able to make each design completely unique.

To me and my family the elephants represent the love we each have for Iain, and the love he had for us. They have given us all great comfort that part of Iain is very much still with us, with the saying ‘an elephant never forgets’, this couldn’t be any truer.

Since starting to make these special elephants I have also found that they have also enabled people to talk more openly about death and dying, in some cases having those often difficult conversations about our personal wishes. None of use wants to think about our own mortality, but it’s so important to share your thoughts and wishes with your loved ones.

Since Iain passed away we have raised over £4,000 in his memory and are committed to supporting the vital work of Trinity Hospice. Since launching ‘Elephants in the Room’ I have raised a further £10,000 for the Hospice. If you would like an elephant made using the clothing of a loved one please get in touch, via Trinity’s Fundraising Team. All I ask is for minimum donation per elephant to be made to Trinity Hospice, so others can receive the care and compassion Iain and our family received.