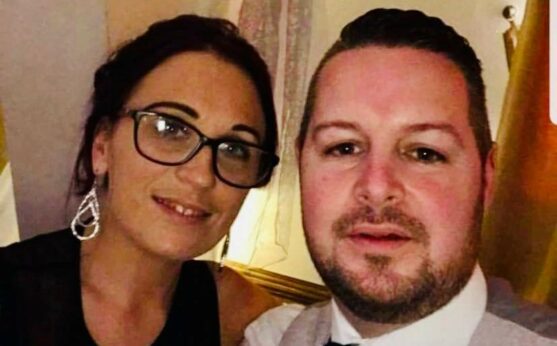 Chris was in Trinity Hospice for five days.

That’s not a long time, but for us, it was a lifetime. After caring for him – doing everything for him – for five months, in those five days I was his wife again.

I could finally cherish our moments together, knowing they were limited.

We’d had a very difficult two years. Chris was diagnosed with oesophageal cancer in 2018 and had radiotherapy and chemotherapy before a 12-hour operation to remove the majority of his oesophagus.

He was on the road to recovery, but soon Chris became unwell again. The cancer had returned. He had another operation and more chemotherapy.

It wasn’t even a year later when, during lockdown, we discovered it had come back. We had some tough conversations and he went in for another operation. It took 19 hours and left him unable to speak and requiring round the clock care.

It was hard, but we were working towards getting back on our feet – to get back to our new normal.

But he deteriorated. There was another tumour and this time, there was nothing we could do. There was no operation, and Chris was too weak for any more treatment.

Chris was reluctant to get Trinity involved. He was only 38 and had a real fear that going to the hospice was accepting it was the end. But I was giving him so much care, I got to the point where I simply couldn’t do it anymore on my own.

I was surviving on four hours of broken sleep. And Chris was in so much pain.

The nurses from the hospice started to call, to make sure I was alright as much as Chris. Those calls meant the world to me. I wasn’t alone. And Hospice at Home came to see Chris when I worried he wasn’t right. Just the reassurance they were there was so important.

We went into Trinity to help manage his medication. Chris’s plan was to die at home, and I was happy with that, but when we got to the hospice, he deteriorated. He suddenly needed a lot more medication to keep him comfortable.

We both just seemed so much more relaxed when we were in the hospice. For so long I hadn’t been able to be Chris’s wife or spend any quality time with him. I knew he was going to die and what we were facing, and those five days were so important to me.

In the end, I wasn’t frightened. It was so peaceful and calm, and we were just together.