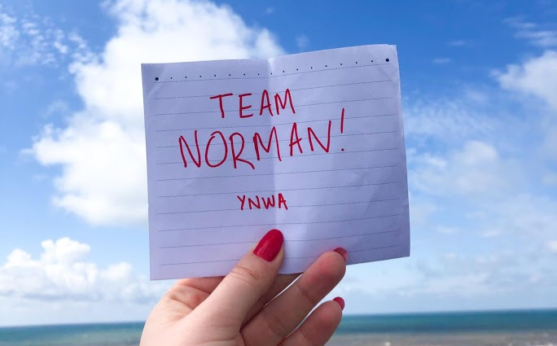 Last year David Wilson and Matt Porter took part in the Beaverbrooks Bike Ride after their relative, Norman, sadly passed away in Trinity.

“We wanted to raise money as a thank you for the compassion Trinity Hospice showed Norman during his time there. We also wanted to raise awareness of the fantastic end of life care that the hospice provides for the people of the Fylde Coast.”

“We rode as ‘Team Norman’ and completed the longest distance of 45 miles. Although it seems a long way, the Bike Ride isn’t a race – you go at your own pace, and there are shorter routes, so it’s suitable for all – and we thought it was a fantastic event to do it in his memory.”

And now Team Norman is back: bigger, stronger and even more determined than before.

“Norman was a huge part of our lives, as a father and grandfather, and when he sadly passed away it left a hole in our lives that can never be filled.”

Within just a few weeks of starting, Team Norman clocked up a huge distance. Between them they completed two 10k runs, a 25k run and a  few 10k ,15k and 20k walks between them And if that wasn’t enough, they covered over 240k just cycling!

“”The whole family have been amazing in their efforts over the last month or so. It hasn’t been easy for some, especially given the circumstances, but everyone that said they would carry out an event has done!”

Team Norman are currently on a total of nearly 600km, which is absolutely incredible, and have raised over a £1000 and counting in fundraising thanks to many generous supporters.

“One thing that we’re all so grateful for is the exceptional care and kindness shown by all the wonderful people at Trinity Hospice.”

“They made it possible for him to have the care and dignity he deserved in his passing. Their work was and continues to be remarkable and we can never ever repay them, however we can only try and do as much we can.”

If you would like to take part in any of our Virtual Events (‘Run, Cycle or Walk’), click here