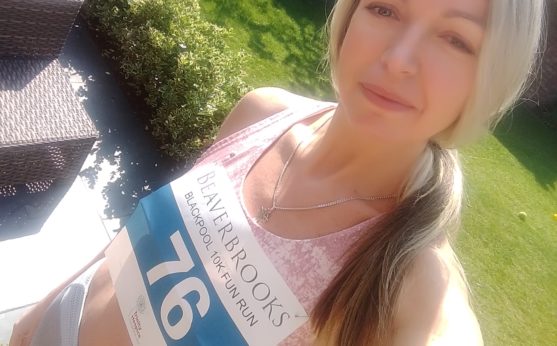 She’s just one of our fabulous supporters who’s taking part in the Virtual 10k and raising money for Trinity Hospice.

Ellie decided to join this year’s event as both a tribute to her mum, Ann, and as a thank you to Trinity.

Ann sadly passed away in the hospice on 12th March 2020 and was cared for on the In-Patient Unit for five weeks.

“I spent every day at the hospice with my mum and saw first-hand the unbelievable work carried out by all the staff and volunteers,” says Ellie. “They were so kind and gentle which helped my mum immensely.”

“They were also there for me and my family at what was such a sad and difficult time; we couldn’t have been more grateful.”

For many years, Ann also used to volunteer in Trinity’s Day Therapy Unit as an Art Coordinator, and did her fair share of fundraising for the hospice too. “My mum absolutely loved it. It gave her such pleasure to spend time with the patients making crafts and helping to take their mind off things, even for a short while. She would often tell me what she’d been doing and spoke so fondly of the place and how lovely the atmosphere was.”

“It was only when she was admitted in February that I truly understood why she spoke about it so warmly.”

This is Ellie’s first- but certainly not last- time participating in the Beaverbrooks Blackpool 10k Fun Run. She’s currently training for it, which she’s finding hugely rewarding even at the toughest of times.

“When I’m running and I’m tired and feel like giving up, I only have to think of my mum, the staff at the hospice and the people who’ve been kind enough to sponsor me, and it keeps me going!”

“I’d recommend the virtual run to anyone, especially now with everything that’s going on. Training for a 10k is a great fitness goal and even with a little effort is achievable, even for inexperienced runners. If you only do it as a light jog or a walk, it’s still something!”

Ellie’s also decided to raise sponsorship through her participation, saying: “Ultimately it’s about raising money for this amazing hospice. I want to give back to all those nurses and doctors who work so hard to look after patients and their families.”

She set her target at £250 however in just a matter of days was amazed to see that her total was already double the amount.

“I was conscious that people may be struggling with money at this time and I didn’t want the ask to be too big, so I chose a figure that I thought was reasonable and achievable. All I did was set up a JustGiving page, which was really quick and easy to do, and then shared it on Facebook alongside updates about my training.”

“I’m so grateful to everyone who’s sponsored me and can’t believe I’m now over £800. I’m really pleased I’ve been able to raise this amount for Trinity.”

We wish Ellie the best of luck for her run and with the rest of her fundraising.

If you feel inspired by this story and want to get involved with the Beaverbrooks Virtual 10k, or any of our Virtual Events, visit: www.trinityhospice.co.uk/virtualevents

Ellie was also interviewed by That’s Lancs TV. You can watch her interview, here