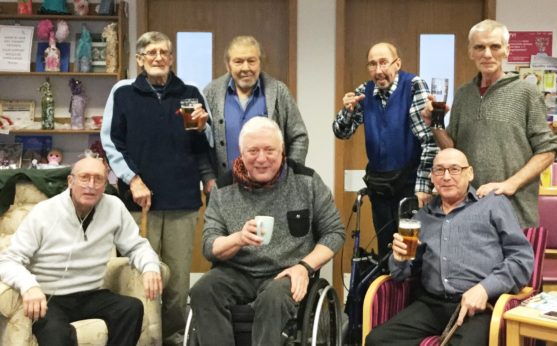 A boys club with a big difference has formed thanks to the care offered by Trinity Hospice’s Day Therapy Unit. The members have terminal illness and they call themselves…The Walking Dead.

That sort of brutal honesty gives a big clue about the mind-set of this remarkable band of brothers who now meet weekly to socialise, share their thoughts, feelings and plans for a future that once seemed bleak.

With new members joining all the time, the core members of The Walking Dead are all current and ex-hospice patients: Roy Thompson, Andrew Ferguson, Brian Cook, Peter Nightingale, Jim Graham, and Darren Radcliffe.

These men have bonded through attending the Day Unit where the Share and Care session – in which everyone including staff and volunteers shares something about their week – helped them to be more positive about their own situations.

A regular haunt is the Bay Horse Pub in Thornton and they got their quirky name thanks to the staff there. The lads meet up for a meal and a drink, or sometimes to watch a band, and say the hospice was the catalyst that has transformed their outlook on life. They continue to have their own Share and Care session in the pub, they said it’s their ‘Trinity after Trinity’.

Finishing the 16 week Day Therapy course at Trinity can feel like an ending – but to these men it has been the start of something amazing. Far from being isolated and unable to share thoughts about their terminal illnesses, the men look forward to meeting up each week. Other people now see them in the pub and want to join them, because they seem to be having the most fun! Keith Livesey, Jim’s mate, has become an honorary member, and their infectious enthusiasm is winning many friends.

Roy said: “We can speak to each other about anything and we genuinely care about each other, it is our unique way of dealing with our illnesses, and our sense of humour has reallyhelped bond us together.” For Roy it really has been a new beginning. He says he felt as though the doctors had given up on him when they referred him to the hospice, but he was made to feel welcome from day one and realised people hadn’t given up him at all.

Peter describes Trinity and the Walking Dead as his second family, and Jim says: “We met In Day Unit and slowly over the weeks started to connect. We are from different backgrounds – joiners, bus drivers, engineers and train drivers – but Day Unit brought us together and we all feel comfortabletogether.”

Brian’s wife suffers from dementia and he lives with his daughter, so having this group of men has been a great outlet for him. The nurses remember that on referral Brian waswithdrawn, understandably consumed with his wife’s illness and very negative about his own condition. But over the weeks he became much more positive.

Andrew had lost confidence, never going out as his mobility was reduced. He credits the group with changing him and giving him a life he never thought he would have.

Staff Nurse Vicky Rashid from Trinity’s Day Unit said: “What am amazing group they are. Lots of patients who come to DTU have lost confidence and coming here does help them,but this group of men have taken it one step further, continuing their friendship beyond DTU, becoming strongeras a group.

“We wanted everyone to know about their story because many people who have a terminal diagnosis feel lonely and isolated. Men in particular don’t always have someone to confide in, or feel reluctant to share feelings.  They have embodied our Day Unit motto ‘The Rest of your Life, not End of life’, however long that will be.”

She added: “They have an honesty that some people might find a bit hard hitting – calling themselves The Walking Dead is certainly thought-provoking – but they are a truly inspiring bunch. If only everyone could see life – and death – in such a positive way. We feel privileged to be part of their journey.”