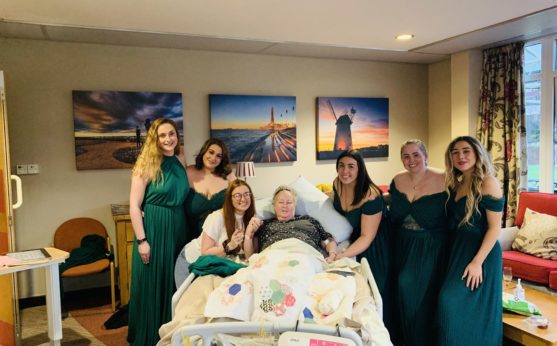 Christmas was mum’s favourite time of year. She was the biggest Christmas queen in the whole world. Her house just became this Santa’s grotto in December – it was amazing! We even went to New York in December 2018. We did literally everything. It was the trip of a lifetime.

We returned home on her birthday, five days before Christmas. We had the best Christmas and New Year, and then in January she had a seizure. It was completely out of the blue. She had tests at the hospital and the doctors told us she had a brain tumour. Within two weeks she underwent two operations to remove it all, and then went through radiotherapy and chemotherapy.

I moved back from Manchester to live with her. I thought it would be a really sad situation, but actually I just got to live with my mum again. It was an amazing year where we got to do all the things we had always wanted to do together – we went to the Flower Show in Chester and one day we went for a ‘boozy brunch’ for my partner’s birthday. While we were there, he proposed to me! Mum was shouting across the restaurant. It was really, really special.

Just before Christmas Mum got quite poorly again and had to go to hospital. She was having a break from her chemotherapy, and a scan showed some black circles on her lungs. While she was there she had another seizure – her first since she was diagnosed almost a year before. She came back home on her birthday. It was her last Christmas.

We made sure it was an amazing Christmas for her. I cooked Christmas dinner for the first time in my life – it was the most stressed I had ever been! We had family visiting in and out all day and mum was in really good spirits. We were so determined to give her the absolute best Christmas, and we did it, somehow.

A few weeks later she was unable to get out of bed anymore, and she went into Trinity Hospice for pain management. While she was there my bridesmaids dresses were delivered to the house, and the nurses suggested we had a day trying them on there at the hospice. For a whole day we took over the Family Room! Mum had her make up on, we had a buffet and some bubbly. It was the best day!

At Trinity Mum had visitors all the time, which was great. I slept over some nights, and we’d watch soaps and have a take-away, just like we did at home. The nurses were absolutely incredible. They were there for me as much as they were for mum, making sure I was OK. They really were our life-line.

Mum decided she wanted to die at home. It was completely up to her, but I was so nervous about it. I’d seen the level of care she needed while she was at the hospice, and I didn’t think I could do it on my own. But the nurses were so encouraging and took the time to show me how to look after mum, and would sit with me until I was happy I knew what to do. Without them, I just wouldn’t have been able to do it.
At home, the district nurses and the Hospice at Home team were there whenever we needed them. And because of them all – the hospice team at the hospital, the nurses at Trinity and the nurses in the community, together they let my mum have the death she wanted; surrounded by her family and loved ones at home. I’ll always be so grateful for that.

Trinity will always have such a special place in my heart. It really is amazing, full of amazing people.