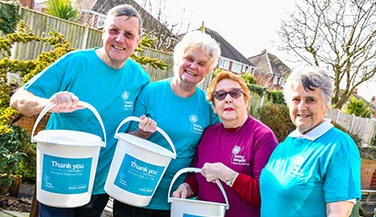 “Many firm friendships have been formed over the years and, as well as enjoying each other’s company, members have been able to support each other in times of sadness and difficulty.”

Our Friends’ Groups are a busy bunch of people – organising all sorts of fundraising events across the Fylde Coast. Here’s the story of the Poulton Group; an inspiring bunch of people whose dedication and ingenuity never ceases to amaze us.

The Poulton Friends Group was one of the earliest to be formed (in 1979) and has worked continuously since then, raising funds and helping to publicise the work of Trinity Hospice, Brian House and all the hospice’s  palliative care services.

Originally just a handful of people, who at that time were strangers to each other, met in members’ homes. Officers were appointed and some of those are still in office today. The group rapidly became too large for home meetings and was fortunate to have the support of local churches, who allowed the group to use their premises free of charge.

While other charity organisations are sadly folding due to lack of support, Poulton Friends is expanding, with over 100 members involved either as active fundraisers or supporters.

Many firm friendships have been formed over the years and, as well as enjoying each other’s company, members have been able to support each other in times of sadness and difficulty.

The group holds regular events in the Poulton area, and by popular demand has increased the number of Coffee Mornings, the most recent one raising almost £800.

New members are always welcome – meetings are held on the first Wednesday of each month at Poulton Methodist Church on Queensway, starting at 7.30pm.