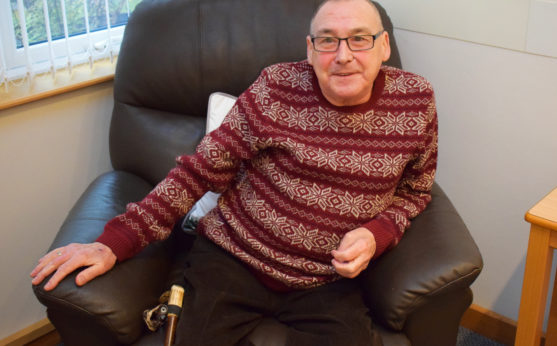 When Andrew Ferguson’s health started to deteriorate, he was referred to Trinity’s Day Therapy Unit for support. Little did he know though that the 16 week course provided would help him transform his life completely.

A few years ago, I had really given up. I had poor mental health and although I knew I needed help, it was a struggle to find motivation. I didn’t go out or speak to anyone- something which wasn’t helped by my physical health.

I had been diagnosed with a number of severe health problems (including issues with my heart and liver, as well as a build-up of calcium in my legs), which escalated quickly. Doctors told me there was nothing they could do and that I had six to nine months to live.

After the diagnosis, my District Nurse referred me to Trinity Hospice for their Day Therapy Unit. I’ll be honest – I had no idea what it entailed or what to expect. It was also a big step for me to leave the house and be around others.

I can say now though, this was the best thing that could’ve happened.

I remember spending my first session with some of the nurses and came away thinking ‘I’ve had such a nice day’. It was a huge relief to not be sat at home staring at the same four walls but instead, laughing and joking with people- something I hadn’t done in years!

When you’re referred to Trinity’s Day Therapy Unit, you’re put on a 16 week course and visit once a week, which means you really get to bond with staff and other patients. It’s great to speak to people who are in similar situations and talk about those ‘taboo’ subjects that not everyone wants to acknowledge; things like health issues, end of life plans and funerals.

What’s more, I’ve also had the opportunity to start doing exercise. Prior to coming to Trinity, I avoided doing any because of breathing difficulties and the fact I was frightened of blood clots in my legs. However thanks to some reassurance from the nurses in Day Therapy and being able to access the gym in the Unit, I’ve slowly increased my fitness. I’ve gone from being able to do nothing to doing 15 minutes on the bike! I also set myself a goal to walk to the park and back from my house and not only have I done that, but did what I thought was impossible and reached the other side of the park.

“It’s so perfectly put together and I don’t know how they do it. I’m in awe of everyone here”

Trinity has given me a new lease of life and fresh perspective on a lot of things! I come in for my sessions and I’m not forced to do anything I don’t want to, but they’ve equipped me with a subtle confidence to keep pushing myself.

Everyone is as important as each other at the hospice – from the volunteers, to the staff, to the patients. It’s so perfectly put together and I don’t know how they do it. I’m in awe of everyone here.

After my Day Therapy sessions finish in a couple of weeks, I’m hoping to carry on as I have been, getting out of the house regularly, seeing friends I’ve met in Day Therapy and even going for a pub lunch on a Saturday, because why not?