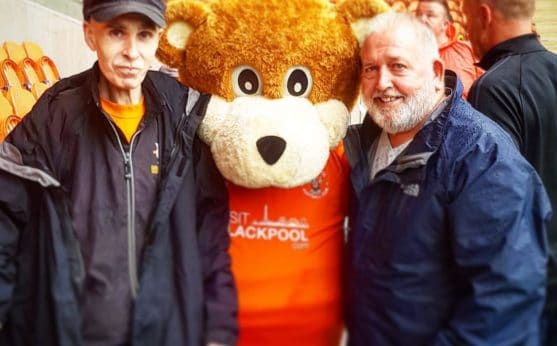 Last year, Russell found himself in intensive care with kidney failure and pneumonia. Following a series of subsequent tests, he received the devastating news that he had terminal prostate cancer just before Christmas.

Determined to remain positive, Russell continued to pursue his love of walking, and cheering on his beloved Blackpool FC. But as his health deteriorated, his much-loved walks and visits to Bloomfield Road became less and less.

Russell was referred to our Day Therapy Unit to help manage his symptoms and maintain his independence.

He said: “My lack of mobility came as a huge shock to me and really brought me down. I was no longer able to do the things that I enjoyed the most.”

“I wasn’t sure about the idea of going to the hospice at first as I didn’t know what to expect, but it was completely different to how I thought it would be.

“It’s such a life-affirming place. Staff and volunteers helped me to write a bucket list of things I would like to do while I am still able. As a Blackpool FC fan, I have always continued to keep up with the fixtures as much as possible, but my dream was to be able to soak up the atmosphere at a game again.”

As a young boy, Russell had always dreamed of being a footballer and told staff and volunteers in our Day Therapy Unit how much he wanted to see the Seasiders play one last time.

Every patient is encouraged to make a bucket list when they come to Trinity. It’s so important that we can help people have these experiences, wherever we can. When we heard about Russell’s wish, we got in touch with our friends at Blackpool Football Club and we were so delighted to be able to make his wish come true.

Russell was over the moon when he was able to pay a last visit to Bloomfield Road to see his team take on Lancashire rivals Blackburn Rovers.

He said: “I was just so surprised and excited when I found out that the staff at Trinity had arranged to take me to the game. When I was a kid, I wrote letters to Jimmy Armfield and he wrote back to me! Seeing his statue brought back such happy memories.

“I can’t believe that the staff and volunteers at Trinity made this happen for me.”