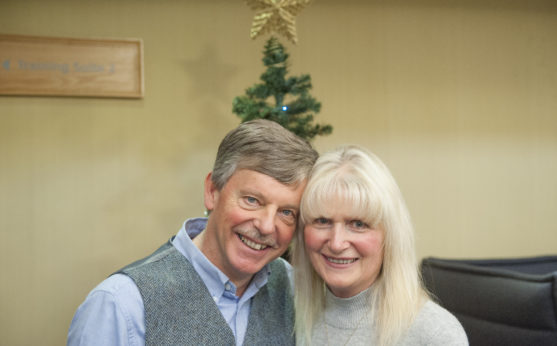 When you’re given a terminal diagnosis, you start to think about the future.

There are a lot of unknowns and horrible realities, but for my wife Margaret, these were things she confronted head on.

Margaret was diagnosed with breast cancer in 2011, and knew then that she wanted to spend her final days at home. She wasn’t adverse to going to the hospital or to Trinity’s In-Patient Unit- she knew that she would be well looked after at both- but she was adamant that home is where she wanted to be.

Trinity was first mentioned very early on in Margaret’s consultations. I was taken aback at first- associating the hospice with being close to death or death itself. But Margaret being as practical as she was was encouraged by the hospice and embraced its support over the eight years that she went on to live. I think she dealt with things better than I did at times.

With the help of Trinity, Margaret was able to receive care at home as requested – even when she deteriorated in the final weeks of her life.

During the day she would have regular visits from District Nurses which was fantastic, but it was at night when Margaret often needed medical support.  It’s amazing how many problems occur at 3am; when you can’t just ring the doctor. Fortunately, the Hospice at Home team was just a phone call away.

All the staff were fantastic, but there was one nurse in particular who I will always say was ‘the best, and that was Julie. Julie was always well-equipped to deal with situations, whether it was helping Margaret with the pains and discomforts from the cancer or with the side effects of chemotherapy.

Julie would always asses Margaret thoroughly, but she also checked on me. Having never been through something like that before and not knowing what to expect, it was reassuring to have Julie for advice.

And this has continued. Since my wife passed last year, Julie is in touch frequently to make sure I’m ok. She also arranged for me to have complimentary therapies at the Day Therapy Unit and recommended I get in touch with the Linden Centre for Grief Counselling as she felt it may be valuable. Again, I can’t thank Julie enough. I’ve now had eight counselling sessions with Diane over the phone (due to COVID-19) and really have found them to be incredibly beneficial.

Both Margaret and I couldn’t have asked for better care over the last several years, particularly from Trinity. Margaret loved her house and made it clear what she wanted – and this was all granted thanks to the work of these brilliant people. They also made it possible for me to keep my promise to her: home is where she’d be at the end.

Margaret Collinson passed away peacefully in her home in Lytham with David by her side on 23rd October 2019, age 69.