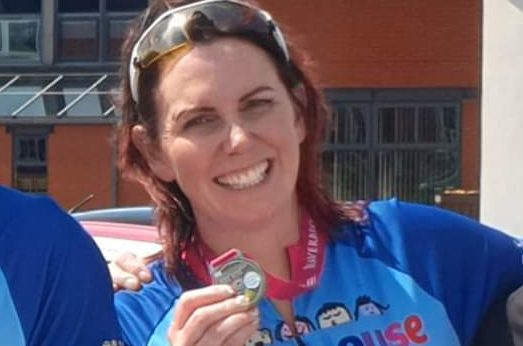 Last week Sue Rigby received a phone call she didn’t expect… It was our Fundraising Team letting her know that she’d won £1000 on the Trinity Lottery.

“It was such a huge shock; I’ve never won that much in my life!”

After hearing about the Lottery last year, Sue decided to give it a go. “To be honest I didn’t really think about winning, but more about giving regularly to the hospice; I know the income is much needed.”

“I signed up a Direct Debit for two numbers, which is less than £10 per month and just over 30p a day.”

Winning the top prize of £1000 couldn’t have come at a better time for Sue as like many, she’s been furloughed due to COVID-19. Sue also has plans to celebrate her daughter’s 21st in October with a trip to Mallorca – something that had become a worry rather than something to look forward to. “I’d been wondering how I was going to save for it with a decreased income,” she said.

But Sue’s unexpected win has helped brighten her outlook: “This has paid for my daughter, Lucy, and her partner to go on holiday and that’s a huge weight off my mind.”

“I honestly can’t thank Trinity enough and am so glad I joined the Lottery on a whim that day.”

As well as being a part of the Lottery, Sue supports both Trinity and Brian House by being involved in our events. Over the years she’s been a part of Bubble Rush, Blackpool Colour Run, Beaverbrooks Bike Ride and Beaverbrooks 10k.

“Unfortunately, due to Covid, a lot of my favourite races have had to be cancelled for safety. It broke my heart as I know how much the hospices rely on the income from them.”

“But then came the great new that we can do some virtually and so we signed up without hesitation!”

Sue has also been a member of ‘Team GB (Guys of Bilsborrow)’ for several years and helped them in raising much-needed funds for Brian House. Last year alone, the Team cycled from Scarborough to Blackpool in just two days for the hospice, and were also a part of Garstang Beer Festival, Garstang Ice Cream Festival and Guys Bonfire Night- of which the organisers donated the money raised.

“I’ve worked with children for many years and Brian House in particular touches my heart.”

In 2018, Sue and the Team very kindly presented our children’s hospice with a cheque for £20,000 (which they managed to match again in 2019)! “It was literally the best feeling in the world to be able to hand it over.”

“We were also given a tour of Brian House – what a beautiful place.”

“Whilst looking round we learned that although £20,000 seems like a lot of money, it’s only enough to keep Brian House running for one week! The whole experience just gave me more determination to raise funds.”