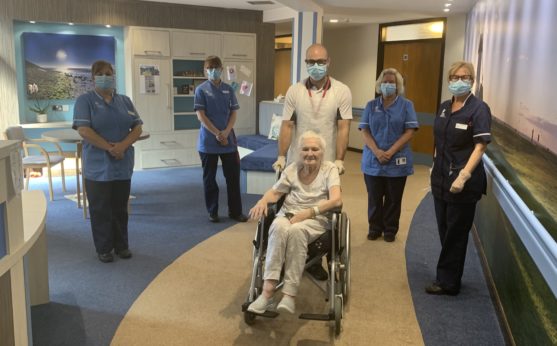 When I arrived at Trinity Hospice I had no idea where I was. I didn’t even know who I was. I was on my way out of this world.

I was diagnosed with Covid-19 at Blackpool Victoria Hospital, and I was going to die from it. The doctors asked me where I wanted to be, and I chose to go to Trinity Hospice. It was the best decision I have ever made.

I was in an out of consciousness, and I just wanted to go peacefully. I had my last rites read and everything. But there’s something about Trinity. The staff were with me constantly. I don’t think they left me alone for any more than an hour, and I could hear them cheering me on.

It’s like, because of them, I decided not to give up. I came around, and I can’t believe how different a hospice is to what I thought it would be.

I thought, as I’m sure most people do, that it would be a nice place to spend my final days. But what this place actually is, is a miracle.

I bet there’s not many people who think you’d get discharged from a hospice, but here I am. When I tested negative for that dreadful virus they said I could go home. I needed work doing on my house, so they even arranged for me to stay at a care home near by while it was carried out!

And when the time came for me to leave, even though I would have happily stayed, they all lined up and clapped as I went passed them. It was such a surprise!

The amazing staff couldn’t have done more for me even when they didn’t know how long I had left. They have done everything I have asked, even if it’s a completely outlandish request. Everyone has been so good to me. If I was to die tomorrow I would have absolutely no fear because I know at Trinity I have had the best care possible.

It’s funny, because while I was working at Blackpool Victoria Hospital in the 1970s, I was involved in helping raise money for the hospice with Dr David Cooper. We used to go around to all places with white tins with big blue writing on, I’ll never forget that, to get money to build the hospice. I never envisioned back then that it would be like it is now. And I certainly never thought I would be there, at 85 years old, sitting in one of the beds about to go home. What Trinity is today is more than anyone could have thought it would be all those years ago.

I honestly believe it was the incredible doctors and nurses at Trinity who got me through. I really do have them to thank for being here today. I simply wouldn’t be here without them.

I can’t praise this place enough, even if I could get on the roof and shout it.