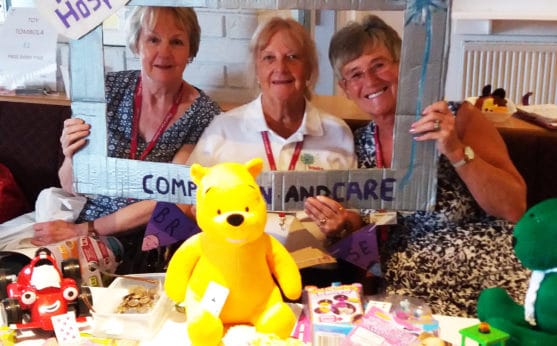 The Thornton Cleveleys Friends group are a hard working band of volunteers who work to raise funds throughout the year whilst supporting Trinity in any way that they can and raising awareness of the Hospice and the services that it provides.

It was started in 1985 / 86 by Kay Thornborrow and her friends and work colleagues following the death of her father in Trinity.

Kay took on the role of secretary and her friends Norma and Tom Boyd became treasurer and chairman. Since that time the group has only had 2 further secretaries and 3 further treasurers but many chairmen and vice chairmen. Julie Evans who was one of the founder members and vice chairman for many years still works hard on the committee and Tom remains our president.

Having started off with small events like coffee mornings and pancake evenings in members’ houses we became more adventurous as new members joined the group and moved on to garden parties, Victorian Breakfasts, theatre trips, plant sales and open air band concerts to name but a few.

Over the years fundraising has become more difficult as more and more organisations compete for money from the general public and so our events have changed to reflect this. We now concentrate our efforts on coffee mornings, summer and Christmas fairs, Afternoon teas, Quiz nights, Ladies lunches and store collections all which bring in a steady income.

In the last financial year to the end of March 2018 we were delighted to donate £20,466.67 to Trinity. We would really like to have some new younger members joining us to ensure the continuation of this group into the future.

If you would be interested in joining us or volunteering as a helper, please contact our secretary Kath on 01253 867669, 07917632444 or email kath.burnmail@btinternet.com