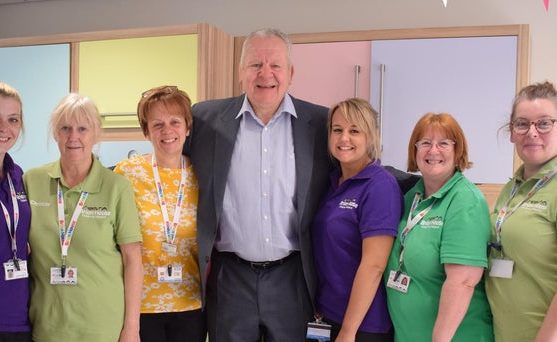 Rugby giant Sir Bill Beaumont has thrown his weight behind the Trinity Hospice Emergency appeal as the current total breaks the £120,000 mark.
The hospice is facing a £1million shortfall in income because of the cancellation of its fundraising events and prolonged closure of its charity shops, and launched its appeal to help close the gap. The hospice is not part of the NHS and must raise a massive £6 million a year in voluntary donations.
Sir Bill, President of both Trinity Hospice and Brian House Children’s Hospice said: “As we emerge from lockdown please remember the hospices and the continued challenges they face. With mass participation events cancelled and fundraising shops closed for weeks during this unprecedented period, it is a worrying time.
“Staff at Trinity Hospice and Brian House Children’s Hospice have moved mountains in recent weeks, stepping up to the challenge of caring for Covid-19 patients and helping the NHS in many ways. But the uncertainty going forward, and the estimated £1 million lost income mean that the hospice needs the help of our local communities more than ever.
“I want to say a huge thank you to everyone who has donated to the Trinity emergency appeal or contributed in some other way – you are part of an incredible team here on the Fylde Coast. Every pound raised, every item donated to Trinity’s shops will help close that funding gap as we, hopefully, head back to normality.”
A casualty of the Covid-19 crisis is Trinity’s annual Colour Run, held on the beach at St Annes in July. It has been cancelled but people are being offered the chance to ‘make their own rainbow’ by buying a paint pack and holding their own small scale event.  There’s some good news for Trinity retail too – the hospice’s donation centre on Talbot Road Blackpool re-opened on Monday June 1st.  See the Trinity Hospice website for more details.