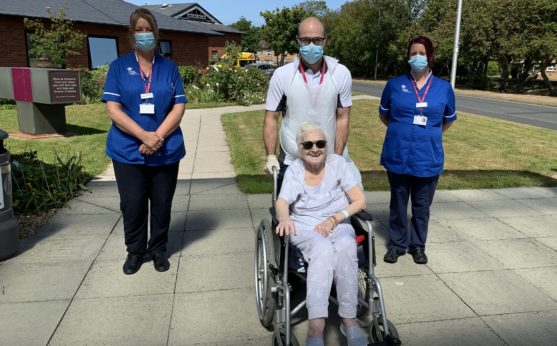 This week we have had the absolute privilege to clap out the amazing Patricia who came to us for end of life care after testing positive for Covid-19.

Patricia, 85, came to us after spending three weeks at Blackpool Victoria Hospital where she had been diagnosed with the virus. As her health deteriorated, doctors told her she was unlikely to survive and should think about where she would like to spend her last days.

Between states of unconsciousness, Patricia chose to come to us at Trinity, where she was even given her last rites. But she miraculously began to recover and, against all odds, tested negative for the virus and was well enough for discharge.

Our staff say her recovery is down to her sheer determination, but Patricia says it is our doctors and nurses who are solely responsible for the uplift in her health.

“It’s them, talking to me all the time, even when I was unconscious, that got me through,” she said.

“I simply wouldn’t be here without them.”

Patricia, who is originally from Whitley Bay in the North East, fell at her home in Marton back in February. She was taken to hospital with a broken wrist, but was diagnosed with severe anaemia. She was given two blood transfusions and IV antibiotics, and returned home a week later with her arm in a plaster cast.

After two days, she developed a cough.

She said: “It was a dreadful, dreadful cough. I’m sure they could hear me at the end of the street.

“I had some awareness of Coronavirus as it had been on the news, but I didn’t think of it when I was coughing. I was having carers in twice a day after my fall, and as soon as they saw me, they knew I would have to go to hospital.

“As soon as I got there, they said I had it.

“I was so poorly, and developed pneumonia as well. They put a mask on my face and it was just horrendous. I knew I was going to die.

“Before I left hospital I didn’t know where I was or even who I was. When they asked me where I wanted to be at the end, I just said the hospice. I thought it would be a quiet and peaceful place to die.

“For two days, I really was on my way out of this world. I remember thinking ‘just let me fall asleep. I’m ready’. I wasn’t scared. I just wanted it to be over because I was so ill.

“But I was never left alone, and the amazing staff at the hospice were talking to me all the time; getting me through. Everyone thought I had just days left, but they never wrote me off. It was like they were cheering me on.”

Patricia says staff at the hospice have done everything she’s asked of them, no matter how big or small. We work closely with care homes across Blackpool, Fylde and Wyre; advising staff and helping provide a smooth transition from the hospice, so we were able to arrange for her to stay temporarily in a care home near to where she lives while she waited for work to be carried out at her house.

Patricia added: “I always thought hospices were a place for people to spend their final days and staff just left you to go in peace. How wrong I was. This place is a miracle, plain and simple. I can’t praise it enough even if I stood on the rooftop and shouted it.”

In April, we were able to increase the number of beds on our Inpatient Unit and relax the our admission criteria to support the discharge of more frail elderly patients from the hospital to receive end of life care at the hospice. The move helped to ease pressure on hospital beds as more and more people were being diagnosed with Covid-19 each day.

Certainly, when Patricia came to us she was really quite poorly and it was absolutely right that she was with us for end of life care. She just seemed to pick up and slowly started to get better.

She really is a lovely lady who is just full of spirit and character, and our teams, including me, have really enjoyed speaking to her and hearing her stories while she has been with us.

In a strange twist of fate, Patricia, a trained nurse who ended up teaching at Blackpool Victoria Hospital in the 1970s, was involved in fundraising for Trinity with our founder, Dr David Cooper before it opened 35 years ago this year.

“I remember there was a huge team of us who would go around all places with white tins with big blue writing on to get money to build the hospice,” she said.

“Dr Cooper was so passionate to get the hospice built, and everyone was involved. I don’t think any of us could have imagined back then it would be the incredible place that it is today. I certainly would never have thought I would be here, at 85, sitting in one of these beds about to go home.”

Now, as she prepares to leave the hospice a Covid survivor, Patricia is keen to spread her positivity to others.

“It is thanks, completely, down to the amazing staff at the hospice. They are the reason I am here today.”

We launched an emergency appeal last month to help plug a £1million funding gap caused by the cancellation of our fundraising events and closure of all its high street shops. So far the appeal has already raised an incredible £100,000. We are not part of the NHS and must raise more than £6million a year from voluntary donations just to keep our doors open.