Our Night Striders take on the Longest Way 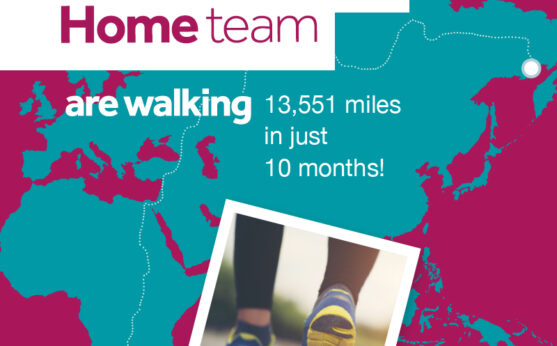 Colleagues in our Hospice at Home team have set themselves a huge fundraising challenge – to walk more than 13,500 miles representing ‘the longest way in the world’! And they hope to complete it in just 10 months.

This amazing group became known as the Night Striders when it took on a virtual Land’s End to John O’Groats challenge last year. When that trek took less time than they anticipated through 2021, they set to thinking of a bigger feat for 2022.

On 1st January, our colleagues took their first virtual step on the Longest Way in the World – 21,808km (13,551 miles) of land uninterrupted by oceans or other significant barriers from Cape Town in South Africa to Magadan in Russia.

The way crosses 17 countries and six time zones, and would take an average of 187 days walking non-stop or 561 days walking eight hours a day.

The Night Striders hope to complete it in 10 months, but have had a rocky start as members have been hit by Covid.

Strider, and Hospice at Home Health Care Assistant Sam Pacey, said: “We set off with a strong start, covering well over 200 miles in our first week, but then Covid hit us massively. More than a third of us had to isolate so our miles took a beating.”

But the team persevered and clocked up an impressive 985 miles throughout January. They hope to march over 1,300 miles by the end of February.

The Night Striders set up as a walking group at the start of last year as a way to release some of the pressures of working during a pandemic during their off-duty hours. The team completed their Land’s End to John O’Groats challenge in just six weeks.

Sam said: “Getting the chance to walk in the fresh air and clear our heads made such a difference to us, and we just wanted to continue that while raising money for our charity.

“We’re walking, running, cycling, swimming, dancing and even roller skating to get the miles in to complete this challenge and we hope to raise as much as possible for the incredible place where we work.

“People do amazing things so that we can give our care to those who need us in their homes during the night, and this is something we wanted to do to complement those efforts. We really enjoyed the Land’s End to John O’Groats challenge, and wanted to do something bigger and better this year.

“It’s tough trying to get the walks in after a long night’s work, but knowing that we’re helping to make a difference in our community – and being able to see first-hard the impact that has on the families who need us – really is keeping us going.”