Our event will be Ian’s 100th lockdown medal 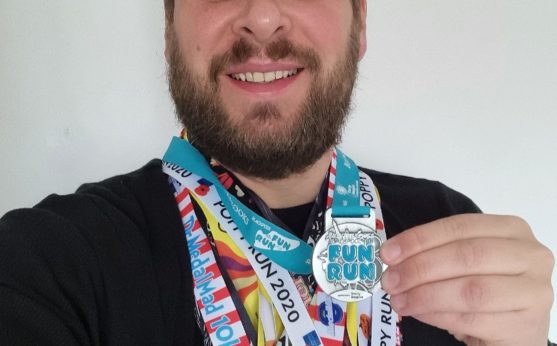 One of our supporters, whose first ever virtual event was our Virtual Beaverbrooks Blackpool 10k Fun Run at the start of the pandemic, is close to achieving his 100th virtual event medal.

Ian Lindsey, 40, works for Beaverbrooks the Jewellers, which regularly promotes charitable events and activities to employees.

When the company advertised the our own virtual 10k fun run to staff last April, Ian thought he’d give it a go.

He said: “I’d never really done anything like it before, but as I’d been walking my new dog, Domino, I thought I’d give it a go.”

As the our 10k was his first event with Domino, they split the distance across two walks, completing 5km on two consecutive days.

Ian said: “Knowing we were achieving something just added to the work we were doing together, and gave a real feeling of accomplishment.”

Ian said the event gave him the motivation he needed to get out walking during the lockdown, and a huge sense of pride when he completed the event and received his well-earned medal.

“Getting that medal made me wonder what else was out there for me to take part in, and my inner-geek was satisfied with some of the offerings.

Many of Ian’s medals have been achieved by walking distances around his hometown in Manchester for charity, including the Poppy Run for the British Legion and themed walks.

He said: “My favourite event was the Poppy Run, and the reason was purely coincidental.

“I walked it on Remembrance Day at Werneth Low. I didn’t realise there was a memorial there and we timed it perfectly to finish at the memorial as the bugle sounded. It was so unexpected and so poignant.

“I am desperate to make it to 100, and while I was searching for my final 10 events I came across this year’s Virtual Beaverbrooks Blackpool 10k Fun Run. What better way to complete my year the way it began? There couldn’t be a better event to end it with.”

Ian is now preparing for his final run, which he will complete on 11th April – the day before he returns back to work as Store Manager at Beaverbrooks in the Omega Boutique in Trafford. In the meantime, he is working towards his other nine medals which he will earn following a series of superhero-themed events in aid of the MPS Society.

He said: “I know this year has been strange, but I have something to show for it.

“100 medals earned, two stones in weight lost and I have a new-found positivity that all started when I received one medal.”

And Ian doesn’t plan to stop now. Although being back at work will affect his availability, Ian is planning to start taking up running challenges and even wants to do a sky dive before the end of this year.

We wish Ian all the best with his final event.

Why not achieve your own virtual event medal? Check out our virtual events, or sign up for a live event here.